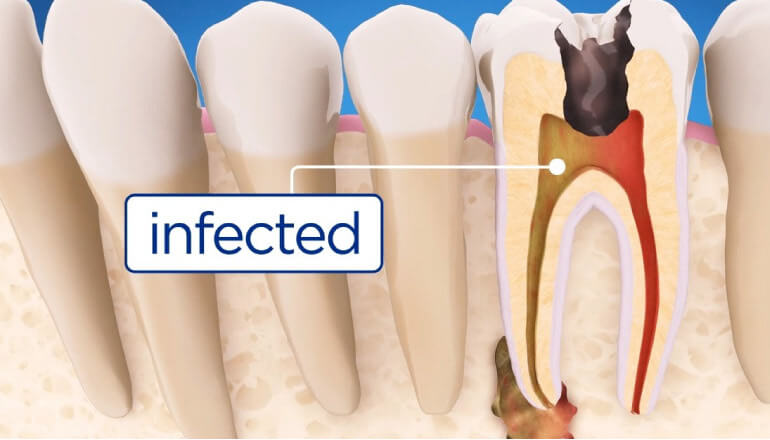 Root canal therapy is also known as endodontics. It is performed when the inner pulp chamber of a tooth becomes infected. The chamber itself is called a root canal. Dentists use instruments to create an opening in the tooth to remove the damaged pulp and clear out nerve endings that cause pain. Then a sealant is placed over the tooth to make sure the tooth and root canal are no longer susceptible to infection. Although root canal therapy has received a bad reputation for being a lengthy and uncomfortable procedure, the truth is that they have never been less painful or easy to perform. Advancements in modern dentistry have allowed root canal therapy to be simple, safe, and effective.

The History of Root Canal Therapy

In 1728, a French Physician named Pierre Fauchard discovered the existence of root pulp within each tooth. He details it in his book “Le Chirurgien Dentiste”. In 1838, the first root canal therapy tool was invented by American Edwin Maynard, who created it using a watch spring. In 1847, a filling material called gutta percha was first used to fill root canals, a method still practiced to this day. In 1900, the invention of x-ray machines allowed for easier detection of root canal infection. In 1943, the American Association of Endodontics is created, giving widespread credibility to endodontics and root canal therapy as an effective practice. Since the 1990’s, root canal therapy has become easier because of rotary nickel-titanium files and enhanced irrigating systems.

Root Canal Therapy Is Nothing to Fear

If you need a root canal procedure, don’t worry! You’re in great hands at Jackson Smiles Family Dentistry. Dentists have been providing this treatment for years and we are the next generation of dental care professionals with leading-edge tools at our disposal. Your root canal therapy will give you much needed relief!

Do you need root canal therapy? Contact us today to schedule an appointment at Jackson Smiles Family Dentistry.